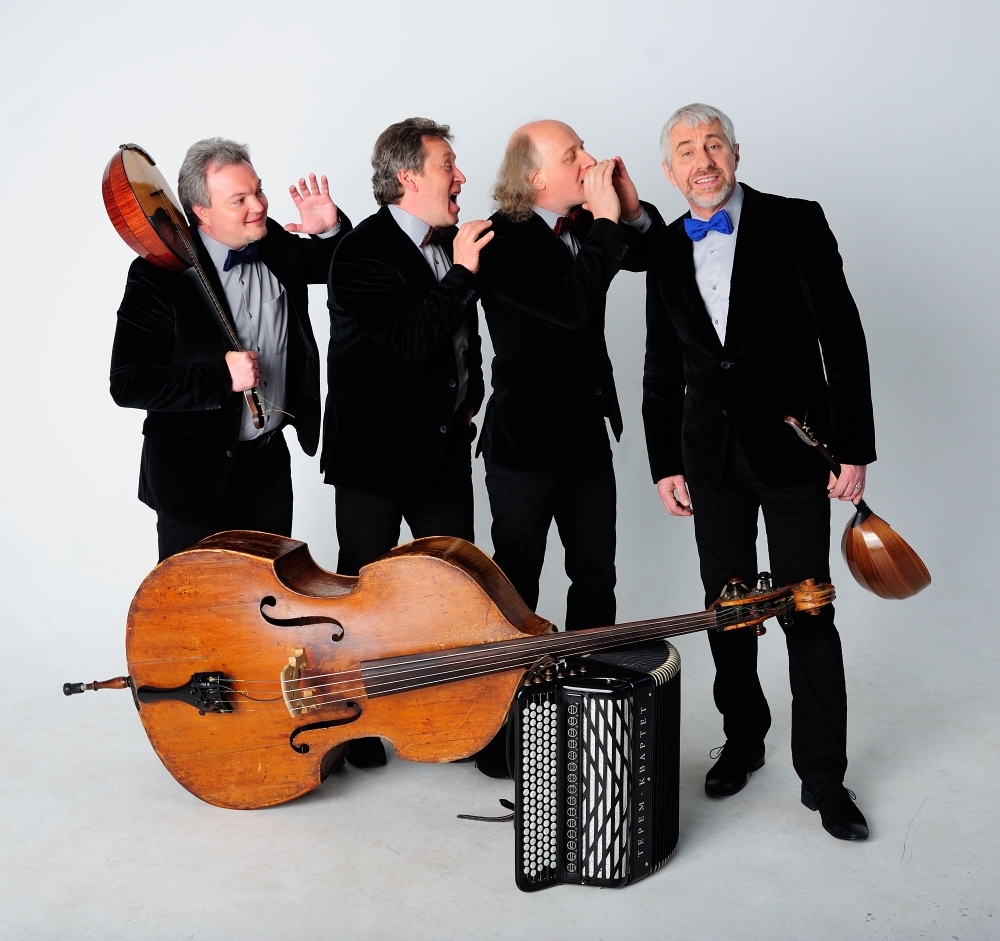 The great conductor Mariss Jansons loves it, and the pop-rock veteran Peter Gabriel loves it, too: Formed in the ’80s in a drab barrack in Postdam, today the Terem Quartet is one of Russia’s most popular musical institutions. Russians, especially St. Petersburgers – and this includes the young and the old, classical music lovers, pop fans, rock fans, jazzmen – are proud of the Terem Quartet. They affectionately call it the “third landmark” of St. Petersburg, after the Hermitage and the Mariinsky Theater. Their televised concerts reach viewing audiences nearly on the scale of large sporting events. 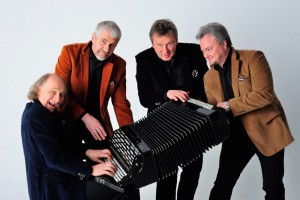 And it was the Terem Quartet to whom the musical accompaniment for many of Russia’s large international occasions fell, such as the Opening Games of the Winter Olympics in Sochi 2014 and the Eurovision Song Contest in Moscow in 2009.

The word ‘Terem’ means ‘large, open house.’ Openness is part of the program. If anyone takes a look at the instruments – bajan, two tiny domras, and an awe-inspiring bass balalaika – and thinks they are dealing with a folklore group, they are mistaken! No ensemble in Russia is as cosmopolitan as the Terem Quartet, who with their – usually humorous – arrangements of popular pieces, have captured the most diverse of stages around the world (2700 concerts in 60 countries) and have played nearly every genre in collaboration with well-known musicians: For Pope John Paul and 120,000 people in the Vatican, or in Summer 2014 at the open-air concert on Odeonsplatz in Munich with the Bavarian Radio Symphony Orchestra under the direction of Mariss Jansons. At the Edinburgh Festival, at the Schleswig-Holstein Music Festival, in Tokyo, in Montreal, or at home with the Mariinsky Orchestra. 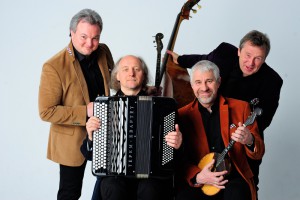 One of their best-loved programs is The White Nights, consisting in part of arrangements of well-known composers like Bach, Tchaikovsky, Rimsky-Korsakoff, Borodin, Stchedrin, and Nino Rotta. However, it also leads to the discovery of many names lesser-known in the West, such as the film-music composer Andrej Petrov, with his very popular melody from the movie “Beware of the Car,” or Isaac Schwartz with the “Melody of the White Nights.” But Bach becomes “MyBach”, and Tchaikovsky’s “November” (“Troika”) transports the four to Yakut for fantastical-seeming chants from the East-Siberian reindeer herders. Further themes from the seasons are then wrapped up in a truly delightful medley by the name of “Tchaikovsky Takes a Walk on the Fontanka.”

The Terem Quartet’s performance at WOMAD in London was also legendary, during which they performed together with pop greats including Peter Gabriel, Led Zeppelin, and Sinead O’Connor.

The uniqueness of the Terem Quartet has been documented by well-known television networks and filmmakers the world over, from the BBC to the Japanese NHK, the German-French ARTE, and the German’s ARD, as well as National Geographic.