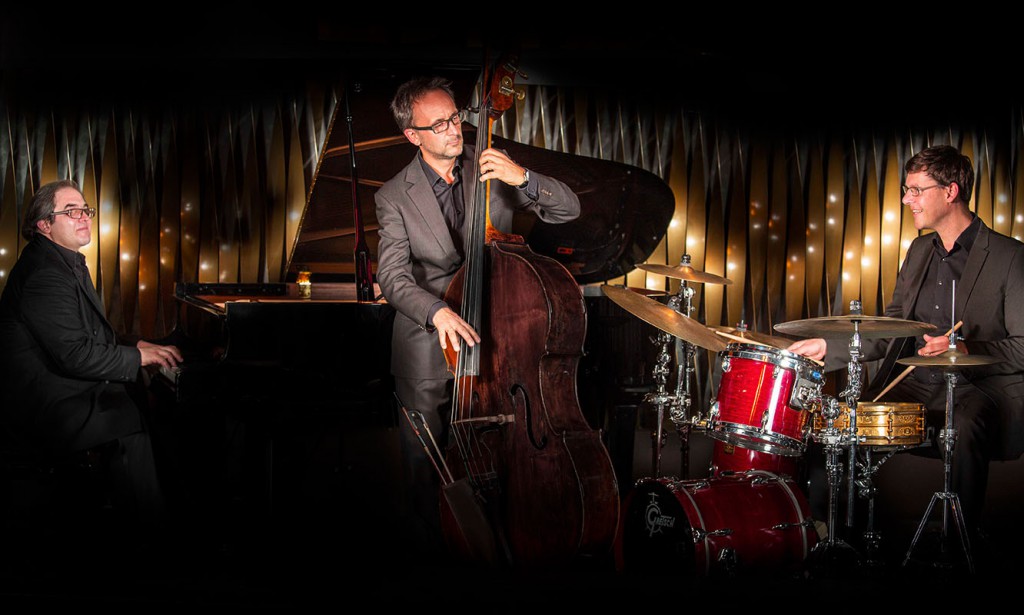 In the recent past, there have been very few cases of musicians filling in on short notice for more famous colleagues who became ill and – like David Gazarov – immediately became stars themselves. The story began in October 2011 after a performance by Jacques Loussier had to be canceled on very short notice. After a rehearsal of a mere 90 minutes, David Gazarov delighted the Loussier fans. Critics spoke of “a worthy successor…”. The subsequent concerts at the Berlin Philharmonic, in Hamburg, Hannover, Bremen and Stuttgart confirmed and enhanced his success. The critic of the Hannoversche Allgemeine Zeitung rhapsodized about Gazarov’s delicacy, strength, virtuosity and innovative power, writing,

“The best thing to do is to give up trying to understand his music and simply enjoy it…the audience at the Funkhaus can be certain that they met a future star at this event.”(Hannoversche Allgemeine Zeitung, 15 Dec, 2011)

At the concerts in Bremen and Stuttgart, the musicians were rewarded with standing ovations. The music critic at the Weser Kurier was enchanted, noting that David Gazarov is “not only a crossover specialist, but a virtuoso, full-blooded jazz musician as well”.

“The infectious drive of “Bebop Idioms” certainly convinced any remaining skeptics in the audience…thunderous applause for a magnificent ‘stand-in’ performance”. (Weser Kurier, 13 December 2011)

With the concert in Stuttgart, where Bach was played for the first time in one half of the concert, Gazarov entered new territory. Under the title BACHOLOGY, he demonstrated how far the art of piano improvisation surrounding Bach’s works can go in the 21st century. First, he played the entire piece almost in the original version, changing the harmonics only slightly. Then, he took just a few bars of the primary motif and made it into a bebop lasting nearly ten minutes, subsequently demonstrating the richness of jazz harmonics and rhythm according to the classic principle of the theme with variations.

“An abundance of talent and surprises: breathtaking technique, a subtle touch, a wide range of timbres, ingenuity and a tremendous amount of feeling, masterful strokes of genius…sometimes it’s as if Art Tatum and Vladimir Horowitz were vacationing together in the Orient.” (Jazzthetik)

The musician David Gazarov, trained in both jazz and classical music and currently residing in Munich and Zagreb, is now one of the most impressive pianists of his generation and never fails to enchant and amaze his audiences with his innovative and expressive power, breathtaking virtuosity and his ability to adapt to different styles. The last-named ability makes Gazarov a unique musician in the truest sense of the word – he unites the often diametrically opposed worlds of classical music and jazz like no other. For one critic he’s the new Friedrich Gulda; for another, he’s Vladimir Horowitz and Art Tatum rolled into one. Martin Drew, who was Oscar Peterson’s drummer for 30 years, simply calls David Gazarov “the only one who gets anywhere near him” (Oscar Peterson). Until his death in 2011, Drew played frequently with Gazarov.

Numerous awards won during his studies in Moscow, including top prizes in the competitions of the Soviet Union, bear witness to the extraordinary talent of this pianist, who was born in Baku, Azerbaijan. Like his famous colleague Aziza Mustafa Zadeh, he studied classical piano and composition under Shostakovitch’s student Elmira Nasirova. But from his father, who conducted a big band, David learned jazz at a very early age. At that time, jazz was officially forbidden, so that a great deal of courage and ingenuity were required to perform pieces by Dizzy Gillespie or Miles Davis. And there were no records available for purchase back then, either. Young David listened to the radio program Voice of America in secret and played the jazz pieces by ear from memory.

After the break-up of the Soviet Union, Gazarov went to Moscow, where he continued and completed his music studies at the renowned talent factory known as the Gnessin Institute.

David Gazarov regularly performed with international jazz greats such as Chuck Israels, Bill Goodwin, Alvin Queen, Niels-Henning Orsted Pedersen, Charlie Antolini, Jiggs Whigham and Keith Copeland. Solo performances also took him to the Montreux Jazz Festival and the Jazz Open Stuttgart. In addition, he was invited to the Wagner Festival in Bayreuth, the Mozart Festival in Würzburg and the International Chamber Music Festival organized by Daniel Barenboim in Jerusalem.

Of the numerous CDs recorded by the pianist, Mad Clown’s Dreams and Black Vision with primarily his own compositions as well as the crossover fireworks of Don Giovanni Bad Boy with Beatrice Richter, written for the Bavarian Radio Symphony Orchestra are particularly enthralling. The CD Chopin Lounge with the Klazz Brothers was extremely popular in far-off Japan and spent weeks on the hit list for classical fans. Their performance at the Dresden Jazz Days, during which David Gazarov and the Klazz Brothers presented jazz arrangements of Chopin’s works, was highly praised by Jacques Loussier, who was in attendance.