„The fastest-fingered fiddler in the world“ (The Daily Telegraph)

Any search for a world-class violin virtuoso will find Roby Lakatos in the top ranks. He has performed successfully on every famous stage including New York’s Carnegie Hall, London’s Royal Albert Hall, Tokyo’s Santory Hall, and the Sydney Opera House. Yehudi Menuhin sang Roby Lakatos’ highest praises, counting his Hungarian Gypsy gift of expressiveness among the traits that make him stand out among violinists. Roby’s ancestor in the seventh generation was János Bihari, who himself was admired by Beethoven. And the ecstatic Alla Zingarese helped spark the gypsy fever of the 19th century with the many Hungarian Rhapsodies, Dances, and Czardas.

„… for sheer fun, give me the Gypsy sounds of Roby Lakatos … Remember all those wild, swirling dance tunes by Brahms, Liszt and Bartok? Well, this is where they came from“ (New York Sun)

Of course, classical music is also an important part of the contemporary repertoire. Monti’s Czardas and Brahms’ Hungarian Dance are also part of Roby Lakatos’ repertoire. But Lakatos is also accompanied by a contemporary Gypsy band made up of a second violinist, a pianist, a cimbalom player, a contra-bassist and an electric bass guitarist. The four members are young musicians in their mid-twenties and the very best in their fields. Jeno Lisztes is reputed to be the best cimbalom virtuoso there is. 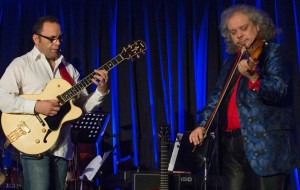 „… His band are Gypsies like him, and each can carry an evening“ (The Independent)

In at least one other genre—jazz—Roby Lakatos is also at the top. None other than Stephane Grapelli introduced Roby into the world of Manouche jazz, the world of the legendary Django Reinhardt. Roby has played concerts with musicians such as Grapelli, Birelli Lagrene and Stochelo Rosenberg, as well as musicians like Didier Lockwood and Randy Brecker.

Adding to Roby Lakatos’ impressive career and musicianship is the fact that he has also appeared with classical violinists such as Vadim Repin and Maxim Vengerov, and in mid-July 2013, with Nigel Kennedy as well.

This musician’s impressiveness is best exhibited by his newest CD, La Passion, which was recorded in front of a live audience of 5000 people in 2012 at the Sydney Opera House. This two-disc CD, which was released in May 2013, impresses listeners from the very first note of the first piece New Alliances. The second piece, L’Alouette, continues seamlessly with incredible virtuosity and vitality. These recordings are the true embodiment of Hans Christian Andersen’s descriptions of a musician who plays like a “demon who has to play his soul free!” But it would be unfair to attribute only this quality to Roby Lakatos. Many pieces and musical selections of Lakatos’ have been further praised by critics from London’s Independent or the Los Angeles Times:

„But when Roby Lakatos spun out his first cadenza, the earth stood still … Lakatos left us with birdsong in our ears“ (The Independent)